EDDIE BOTHA sits at his desk in a large, shared artists’ studio surrounded by multiple artworks in various states of completion. Shelves and crates are stacked high with artists’ media, tools, paper, exhibition posters and splashes of colour. Bookshelves and rudimentary panels of different heights serve as partitions to define each artist’s workspace while the hum of conversation and a constant stream of music form the aural backdrop to the scene. The window next to Botha’s desk offers a view over the roofs of adjacent shops along the small inner suburban shopping strip while an artist’s easel stands at an angle opposite, waiting for him to begin work that day. He stands with his back to the window so as not to block the light.

“I work only with natural light,” he says. Botha works to regular business hours, starting the day at 8.30am and finishing as late as 7pm in summer. “You have to think a lot and ponder on things so every now and then I have to take a bit of a break. On days where I feel clear headed I will draw, and on other days I’ll do a bit more colouring which is more technical than emotional.”

Botha’s former career as a landscape architect was about place-making and creating functional and engaging urban environments for the community to enjoy. For 17 years, he worked on projects in his home city of Pretoria, South Africa and in Malaysia where he lived for seven years. The move to Australia five years ago gave him the motivation to leave the corporate design world to concentrate on his career as an artist. And with great determination, Botha remains rather strict about his working hours. It is no wonder, then, that he has become a prolific artist who has achieved a long list of exhibitions and associated accomplishments in a relatively short time.

He and his wife settled in the regional city of Newcastle, a two hour drive north of Sydney, and where Botha made a significant impact as an emerging artist in the local regional area and also in Sydney. But the Melbourne art scene beckoned and they moved to Melbourne where they have lived for the last three years where the abundance of art galleries and artists’ networks has enabled Botha to build on his success.

“I have always drawn,” he says. “But as galleries slowly picked up my work it snowballed into something bigger until about a year ago I became a full-time artist.” And this is exactly where he wants to be.

Cultural traditions can trigger ideas for artworks but most ideas stem from his observation and analysis of human interaction, “the space between people and how they relate or don’t, different cultures, different people, and questions about what we have in common.”

With work displayed in several exhibitions already this year, he is preparing 10 new works for an upcoming exhibition, Re-immortalisation, to be held at Off the Kerb gallery in Collingwood. The exhibition opens on July 4, 2015 and comes hot on the heels of Decor + Design which opens on July 16, 2015.

His skills and eye for detail developed throughout his working life have left a mark on his style of art which he agrees is hard to define. He describes it as Illustrated Contemporary. “It has been described as Expressionistic Illustrative but all the terms are so vague.”

Working as a landscape architect resulted in Botha developing a graphic style of drawing. He used to paint with oils and then outline whatever he painted. The outlines gradually became more prominent and his unique style of work now incorporates coloured markers, collages and mixed media.

“To me that is how the urban environment is. There are a lot of signs and rules and announcements so I try to duplicate that in my work with commercialism and by labelling things. Everything in life has a label. There is nothing that isn’t labelled. These are the ideas that trigger the works,” he explains. “The background is usually quite busy which replicates the business of life in the urban environment. The lines are like streets and buildings like a metaphor of the urban environment but not an actual image of it.”

Botha is keen to collaborate with other artists and work with interior designers to develop custom artworks for residential and commercial interiors and is currently working on a series of table tops. “I want to get more art on usable things so it can be part of everyday life because art can get quite exclusive sometimes and it doesn’t have to be.” 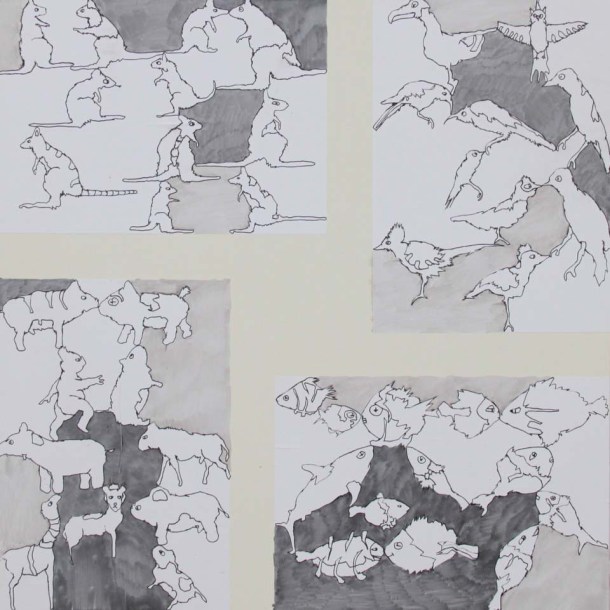